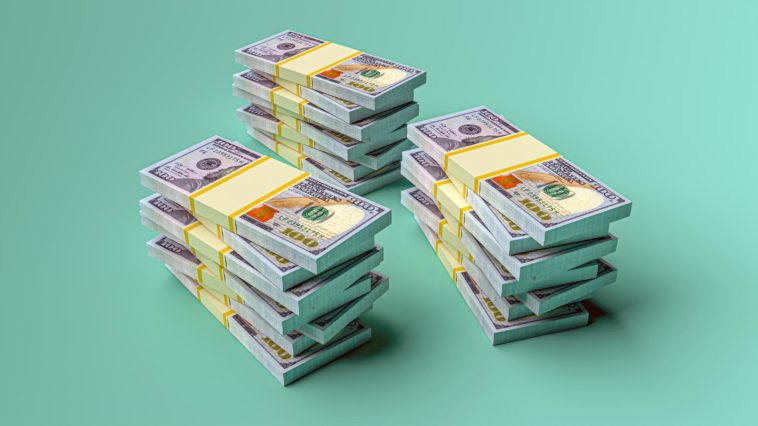 Ever watched a movie where the bad guys walked around with a conspicuous briefcase? You knew right away exactly what that thing contained. In dramatic fashion, one of the villains revealed the contents during a pivotal scene.

The briefcase, of course, was stuffed with money.

As the henchmen beamed evilly at the sight of all those wads of money, you probably went along for the ride. Of course what you were seeing was real money. Of course those bills held immense value.

Riiight…Wake up: They were not real. You can take solace in the fact that the 5’s and 10’s in your wallet (or whatever bills you have there) are genuine, while the millions brandished by Evil Mustache No. 2 are as fake as his dodgy wig.

This, ladies and gentlemen, is what’s called prop money. If you ever find yourself in need of your own pretend bills, we’ve got just the place for you.

Prop Money Inc. prides itself on being “the official industry standard.” (Its own words, not ours. That phrase is on its website.) For filmmakers, music video producers, and all those who need to make it rain in their productions, Prop Money is the answer.

Based in Santa Fe Springs (which, unsurprisingly, is about half an hour away from Hollywood), Prop Money has been dishing out the not-moolah since 2016. The company’s props have been used in movies, TV shows, music videos, advertisements, and other forms of media shown around the world.

You may have seen Prop Money’s handiwork in series like:

Prop Money has also lent props to productions by History, Bravo, Discovery Channel, TNT, and YouTube. The company has been deemed an Approved U.S. Government Vendor under the jurisdiction of the System for Award Management. In other words, you can rest assured about its reliability.

When it comes to pretend cash, Prop Money has got the goods in many different ways.

For starters, the company offers cash props in all denominations and in multiple series. Need a bunch of $100 bills from the 2000s template? How about a wad of $20 bills straight from the 1990s? Prop Money can get you all of these.

The money is packaged and presented in subtle and not-so-subtle ways. Conveniently, the company can get you your simulated cash in stacks, bands, and bundles. What’s more, your props can be stashed inside duffle bags and (what else?) briefcases.

Heck, you can even get yourself a “money gun” package, which consists of prop bills and a toy gun that will fire that glorious paper into the air. (Honestly, this might make for a decent icebreaker at your next workplace party. Try it!)

If you wish to fuel further your creative side, you can also get custom bills made. In celebration of a loved one’s special occasion, get their photo printed on a customized stack and watch their reaction as you hand out the bills with each slice of birthday cake. After all, it’s a once-in-a-lifetime opportunity to see one’s self on currency!

If you reside within the USA and your Prop Money order amounts to less than $100, it will arrive in four to six business days. If it’s over $100, the delivery time is between two to three business days.

Want to get your hands on high-quality prop money? Head over to propmoney.com to place your first order! (While you’re at it, go practice your evil laugh. Hollywood may be calling.)